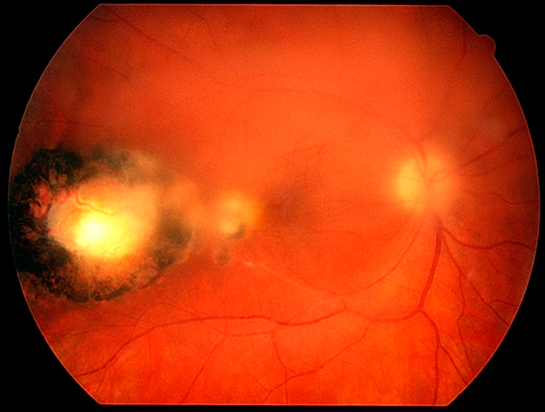 A 60 year old male caucasian accountant presented with a 3 day history of cloudy vision in his right eye. There was minimal pain and redness. He could not recall any similar episodes in the past. He reported no associated headaches, no gastrointestinal / respiratory symptoms nor any signs of skin or mucous membranes lesions.

Past medical history included Rheumatoid Arthritis (on weekly methotrexate and low dose oral prednisolone), treated hypertension and hypercholesterolaemia. He has no known allergies.

On examination, his right VA was 6/9-, left 6/6 best corrected. Intraocular pressures were 45 on the right and 15 on the left. There was a 3+ anterior chamber reaction on the right with associated fine keratic precipitates and significant corneal oedema. Gonioscopy revealed normal looking angles with no evidence of peripheral anterior synechiae. There was no evidence of posterior synechiae or hypopyon. Left anterior segment examination was normal. Dilated examination showed no obvious signs of vitritis, papillitis or retinitis in either eye. It was noted that there was an isolated area of pigmented scarring in the far right temporal retina.

He was commenced on hourly Prednefrin forte, daily Atropine and Combigan drops twice a day. Review after 3 days showed that his IOP had reduced to 20 and his cornea oedema had cleared. There was minimal reduction to the amount of his anterior uveitis. Treatment regimen was maintained and at his 1 week follow up, his anterior uveitis had settled to 1+ cells. However, there was now presence of mild vitritis of 1+ and his VA had reduced to 6/15. The patient had also noticed increasing floaters in his right eye.

What would you do?

Baseline blood test was ordered including testing for TB  (Quantiferon Gold) and syphillis  (RPR, VDRL) serology, HLA B27, ANA, ANCA and ACE levels, all of which returned with a normal result.

However, 2 weeks later, his visual acuity reduced to 6/18 despite resolution of his anterior uveitis. Dilated examination revealed that the amount of vitritis had increased with the evidence of snowballs formation inferiorly.  There was also the appearance of a creamy edge to his right retinal scar.

Uveitis with an associated high IOP is not an uncommon presentation in our clinical practice. The aetiology of uveitis is often idiopathic. Diseases that predispose a patient to uveitis include inflammatory bowel disease, rheumatoid arthritis, SLE, herpes simplex, herpes zoster, sarcoidosis, tuberculosis, syphilis, and HIV.

While most cases of uveitis are idiopathic, a history focused on identifying a potential underlying systemic cause is necessary in order to determine if workup is needed. It is important to remember that approximately 50% of patients have idiopathic uveitis that is not associated with any other clinical syndrome. In this particular case, although the first uveitis presentation was at the age of 60, the fact that the patient had rheumatoid arthritis pointed to it as the cause of his uveitis initially, hence investigations were not ordered on presentation.

However, if there are atypical features noted, then investigations are warranted. In this particular case, it was the fact that his uveitis progressed to involve the posterior segment despite adequate medical treatment. Other reasons for investigation would include:

An infective cause should always be ruled out prior to commencement of intravitreal steroid treatment for posterior uveitis as was in this case. This is done usually by an anterior chamber tap looking for:

Toxoplasmic chorioretinitis is probably the most common cause of posterior segment infection worldwide. A unilateral decrease in visual acuity is the most common symptom of toxoplasmosis. This diagnosis was considered but discarded initially due to the lack of vitritis / retinitis on initial presentation. However, subsequent development of vitritis, focal condensation of vitreous and inflammatory cells and creamy edge over the right temporal retinal lesion raised the possibility again. Corticosteroids should not be used without concurrent antibiotic treatment or in immunocompromised patients due to the risk of exacerbation of the disease.

Most causes of uveitis can be made with a detailed history and careful examination. It is mandatory that a dilated fundus examination be done in ALL uveitis cases as certain causes can be missed if only the anterior segment is examined.

Fluid that Comes and Goes

Quiz Challenge – 30yo with Reduced Vision and Night Vision Issues